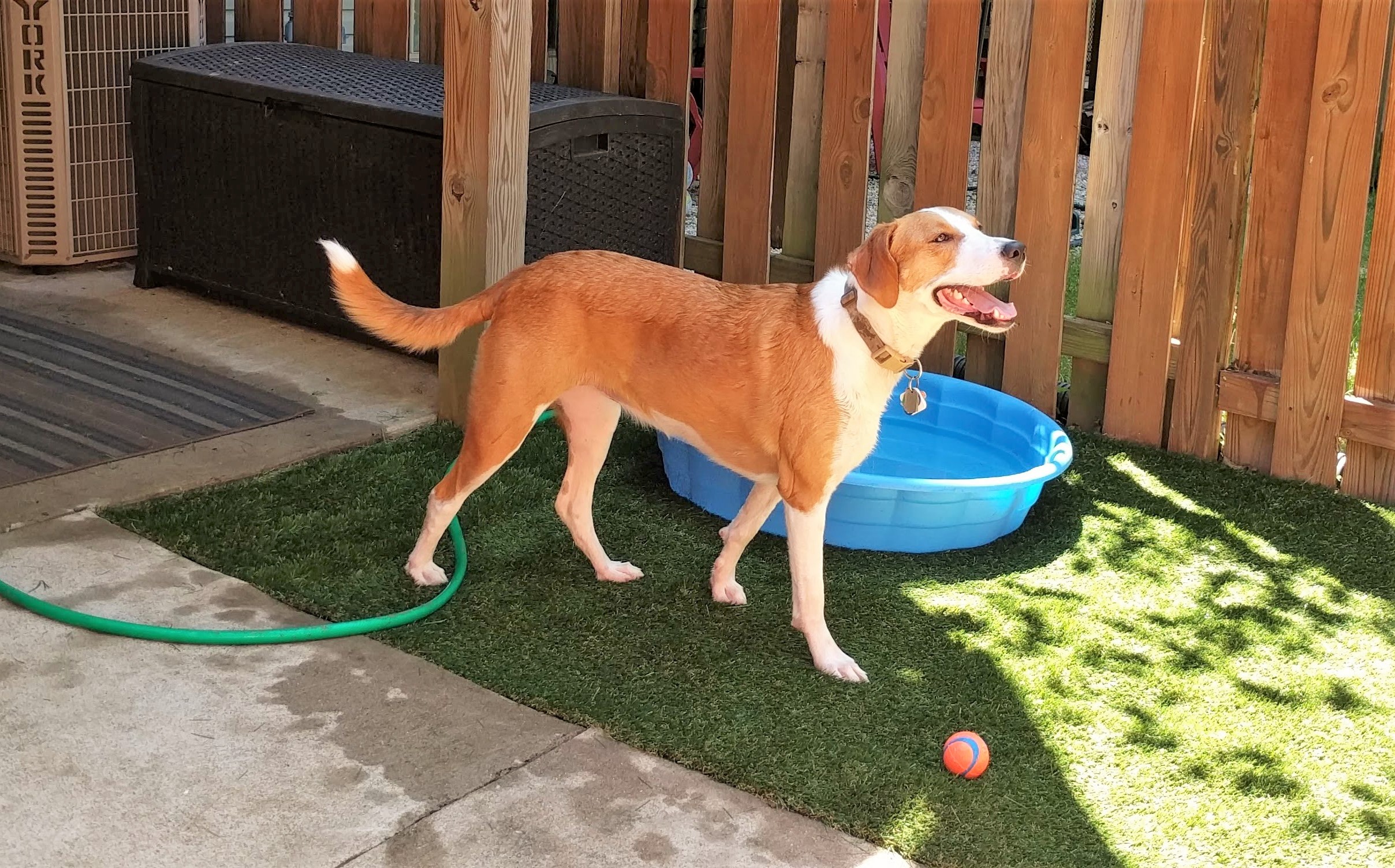 Up until a couple years ago, neither of us had planned to become professional dog trainers. Even today we both still have full-time careers while running our part-time dog training business. Dogs were always a passion and we were certainly more knowledgeable about dogs than your average owner. But in 2014, we took home the dog who set us on the path to opening The Confident Hound. That dog was named Artemis, or as we affectionately referred to her, “The Best Dog”. This is the story of the hound that started it all.

Like most young couples who want to adopt their first puppy, we thought we were going to live this simple life of playing fetch, cuddling on the couch, and going for nightly strolls in the neighborhood. We of course expected potty accidents and knew there would be sleepless nights to start. But we ended up with a dog that would challenge us in ways we didn’t expect.

We first met Artemis at the foster home where she lived with her sister (now Bailey). She barked at us and kept her distance initially, but warmed up to treats and followed her sister’s more friendly lead. We were impressed that she was already housetrained and could sit on cue at only 12 weeks old. The moment we got in the car, we agreed we wanted her and immediately emailed the rescue. Since she was an American Foxhound mix, we decided to name her Artemis after the Greek goddess of the hunt.

Before taking her home, we met Artemis one more time in a downtown area where the foster worked. I have a vivid memory of seeing Artemis with the foster across the street being overwhelmed by the sights, sounds, and children who wanted to pet the cute puppy. Even worse, during our visit a very loud motorcycle started up nearby and Artemis proceeded to panic in fear. In less than 4 months on the planet, she had already experienced stress, instability, and trauma. We’re still kicking ourselves writing about this and wishing we knew then what a crappy idea it was to have a public meeting with a puppy in her prime socialization window. But we were ignorant about stress signals and appropriate socialization. We didn’t know what we didn’t know. 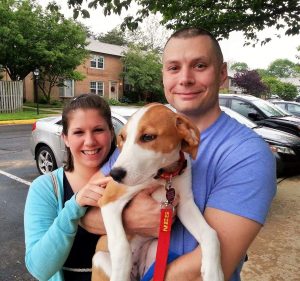 At 14 weeks old, Artemis came home with us and the typical puppy work began: being woken up in the middle of the night by a whining puppy, keeping her from chewing on everything, and trying to keep her exercised and entertained. But walking her proved impossible: she would pull on leash and panic if a car or a truck drove by. She would dart away from us rather than retreat to us. She was overwhelmed even in a fairly suburban neighborhood. We couldn’t walk our dog outside like normal people.

We were told to make Artemis “bomb-proof” by exposing her to different people, places, and things, but we started to noticed that she was fearful in many of these situations. When we took her to Lisa’s soccer game (which was right next to a loud airport), she curled up in a chair and shook the whole time. She would also run and hide during thunderstorms or fireworks, shaking in fear in a closet. She was uncomfortable at the vet and did not like to meet strangers, barking and growling at people who tried to get close to her. She was afraid of the vacuum, brooms, and pretty much any object that was new or moved around. She absolutely had no interested in getting in the tub for a bath. She didn’t seem to “listen” to us in these situations regardless of the training we had done previously. Like most new dog parents, we took her to doggy daycare and dog parks which resulted in incidents of her being swarmed by dogs and even attacked multiple times. Basically, we did a lot of things that we deeply regret given the knowledge we have now. 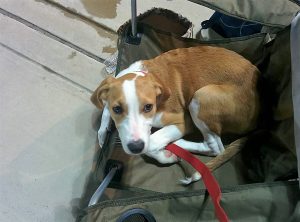 Like most dog owners who get their first truly anxious or fearful dog, we made a lot of mistakes and often lost our patience. We didn’t understand what made Artemis behave the way she did and why she didn’t feel safe with us. We believed the myth that you shouldn’t comfort your dog when they’re afraid because it will reinforce their fear. We took it personally when she gave us a hard time, not fully grasping that she was having a hard time. We loved this goofy, sweet dog so much and just wanted to learn how to make her life easier. Artemis became our baptism by fire: We were desperate to help her and willing to put in the time.

So, we did what nerds do – we sought out the knowledge. We researched, read books, and watched videos on how to best help our difficult dog. The truth, as we came to learn, is that emotions like fear and anxiety aren’t reinforced in the same way as behaviors. We can alter the emotions of our dogs through classical conditioning, but only behaviors can really be reinforced. And sure, when a dog is afraid, they’re often showing a lot of behaviors: panting, lip-licking, hiding, pacing, aggression. But those aren’t voluntary behaviors; they’re all symptoms of an underlying emotional state. If we wanted to fix the problem behaviors associated Artemis’s fear, we needed to change how she felt about the stimulus causing the fear.

This is achieved through desensitization and counterconditioning, which we began to implement with Artemis without quite realizing it.

We also did a lot of training with Artemis and noticed that these “tricks” were a way to hijack her brain in situations where she felt unsure by performing something she confidently knew how to do. 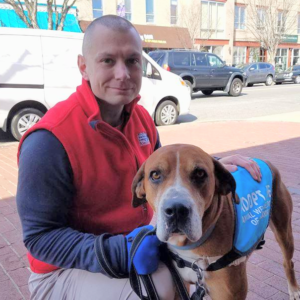 The more we learned about dog training, the more we wanted to know. We loved seeing her start to enjoy life and we had some natural talent for training. After about 3 years of focusing on her, we wanted to help other dogs overcome their struggles and find loving homes. So, we started volunteering weekly at our local animal shelter in Alexandria, VA. That is where our interest truly developed into a hobby. The shelter staff taught us about dog body language, how to recognize when a dog was stressed, and common myths and misconceptions about dogs. We spent our volunteer shifts taking the dogs on walks, playing with them in the yard, working their brain with training games, and giving them the human interaction they desperately craved. 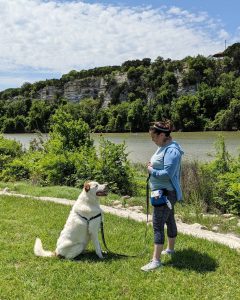 Once again, we learned to be patient and go at the pace of the more nervous dogs. For dogs who didn’t ‘show’ well from their kennels, we showcased their strengths by demonstrating how they had bonded to us and responded to basic cues. We became regulars at the shelter and were fortunate to be given more opportunities to advocate for these amazing dogs who just needed the right home. When we moved to Texas in 2018, we were able to continue this beloved hobby by volunteering at Fuzzy Friends Rescue. After becoming regulars there as well, we were asked to coordinate the volunteer program and pass on our knowledge and skills about dogs to others.

Volunteering only increased our thirst for knowledge about dogs. The first book that really started to make things click was Grisha Stewart’s Behavior Adjustment Training (BAT) 2.0 book. The way she explained things and broke them down into incremental steps made a lot of sense and changed the way we thought about training. That book transformed our walks with Artemis. She went from barking and lunging on leash at the sight of another dog to feeling more relaxed, walking with a loose leash, and spending more time sniffing.

From there, Mike dove into other great books like Jean Donaldson’s “The Culture Clash”, Dr. Marty Becker’s “From Fearful to Fear Free”, Emma Parsons’s “Click to Calm”, and more. Lisa was accepted to the Victoria Stilwell Academy for Dog Training and Behavior where she would learn how to be a professional positive-reinforcement dog trainer from industry experts. We had started to accumulate the knowledge and skills to not only improve our own dog’s life, but to help so many other dogs in homes, shelters, and rescues.

Artemis at the Oncologist (April 2019)

Unfortunately, much of this knowledge came too late. In January of 2019, Artemis was diagnosed with an auto-immune disorder. In April, the diagnosis changed to an aggressive, terminal cancer. She received a blood transfusion and four rounds of chemotherapy, but only made it three months before she was overtaken by the tumors. On July 15, 2019, we said goodbye to the dog who made us better people and changed our lives.

Artemis may have had her battles with fear, but she could also be fearless like when playing fetch or swimming. She was an incredibly athletic, intelligent, and intuitive dog. Watching her deteriorate rapidly was one of the most difficult things either of us have ever experienced. Artemis only spent 5 years on this earth and we had such big plans for her continued path to confidence. We wish we had all this knowledge when she was a puppy; we could have done a better job of socializing her and made less mistakes. Moreover, we couldn’t help but wonder how stress had impacted her body and possibly allowed these diseases to proliferate. 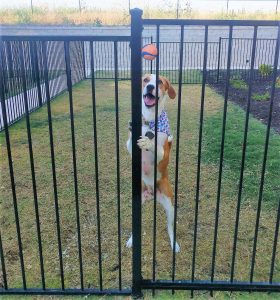 Most dog people have had that one special dog in their life – their “heart dog” or “soul dog”. If you’ve been fortunate to have it happen to you, then you know exactly what we mean. Artemis was most certainly our soul dog. She was our steadfast companion in life and even stood up as Mike’s “best dog” at our wedding.

If we’re lucky, we still only get 10-15 years with our dogs and cancer took Artemis from us much sooner than that. But in those 5 short years, she taught us so much and she sent us down this path to the most fulfilling work we have done. She made us better trainers, more knowledgeable parents, more patient teachers to our clients, and more empathetic humans. To help bring meaning to our suffering, we used her memory as the foundation for our passion to help dogs and their owners make the most of their precious time together on this earth. She is immortalized in our brand’s logo and inspired our mission: To build confidence in dogs and their humans so they can worry less and enjoy life more.

Welcome to The Confident Hound Blog!

Thank you for checking us out! This blog will provide easily-digested information for dog lovers,…

This website uses cookies to improve your experience while you navigate through the website. Out of these cookies, the cookies that are categorized as necessary are stored on your browser as they are essential for the working of basic functionalities of the website. We also use third-party cookies that help us analyze and understand how you use this website. These cookies will be stored in your browser only with your consent. You also have the option to opt-out of these cookies. But opting out of some of these cookies may have an effect on your browsing experience.
Necessary Always Enabled
Necessary cookies are absolutely essential for the website to function properly. This category only includes cookies that ensures basic functionalities and security features of the website. These cookies do not store any personal information.
Non-necessary
Any cookies that may not be particularly necessary for the website to function and is used specifically to collect user personal data via analytics, ads, other embedded contents are termed as non-necessary cookies. It is mandatory to procure user consent prior to running these cookies on your website.
SAVE & ACCEPT